The Laws of Murder (Charles Lenox Mysteries, #8) by Charles Finch 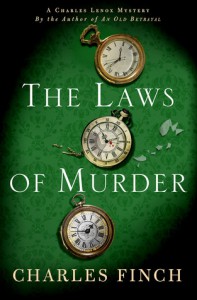 The year is 1876, and Charles Lenox is just out of the parliament with some bad men to catch. Seven baddies to be exact, all of whom has eluded justice. The book starts as he packs away the sixth, felling him to a trap which used the baddy’s greed to full potential. And thus Lenox contemplates the last. The meanest and the baddest of them all. But, he knows it is not easy to catch that guy, so he opens a detective agency, something unheard of in those days, with three colleagues. Bad press, and worse quotes from a supposed friend inside Scotland Yard follows, and the business goes off to a rocky start. The three partners start to bring cases and money except Lenox. He sits idle and contemplates his future as a case drops into his lap, involving the dropping dead of that same bad mouthing good friend within the Yard. Inspector Jenkins.

What worked for me???

1. Great humanist mind-set shown by the protagonist towards animals. The lines dedicated towards the horses of London, showed Lenox to be a man of great humanity and advanced thinking, coming from an Age, when his peers were still hanging and flogging us Indians in India. Lenox even doubts whether they will be able to hold on to India for long. An advanced yet sacrilegious though during that time.

2. Children are difficult to understand in real life, except maybe for their mothers. And they are more difficult to write about. Alan Bradley is doing a wonderful job of having a child as his sleuth, and portraying her as a well-developed character. Though not a main point in this book, Lenox draws up children pretty effectively. Georgina is a treat to read about even in those small paras dedicated to her. With proper timing she is a protagonist in the making.

3. The setting of late 1800s London. For a man who never set his foot outside India, Lenox did a commendable job of describing London from the very first page. From her rain soaked to days to the posture of her citizens which shows they are idling away their time, his descriptions were vivid.

4. Characters. Most of them were well developed. Right from the partner, to the competitor and the culprit, everyone was shown in multi-dimensional ways, which justified their acts. It never felt that “OK, we don’t know about this guy and his life or his character, but we just know that he is the culprit”.

5. Twists. The book was a crime novel, and so by default required twists. And Lenox provides them in abundance. From baddies to holy men and women, everyone was made to go through his twist machine.

What didn’t work for me?

1. The length of the novel could have been shorter. Somehow the length was a bit of a dampener for me. The plot on its own would have been tight and more enjoyable had the book been 50 odd pages shorter.